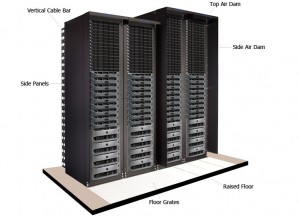 We provide complete IT Solution according client’s requirement. Our team survey the site and design the network structure and implement it. We setup the network devices and configure them. We setup the Server machines and configure them. We are offering Network Solution as per the defined industry standards, which include assembling of various products of different manufacturers’ to make a single system. Our skilled workforce provides excellent services for designing, up gradation and expansion of business networks. These are acknowledged by our clients as these supplies technically efficient, reliable and affordable solutions.

We provide full-service network solutions organization providing quality service to government, legal, and commercial clients. From rebuilding and troubleshooting existing networks to building a new domain from the ground up we provide an end to end solution tailored to the needs of each organization while keeping an eye on the bottom line.

We have skilled engineers to configure wireless devices, layer 2 and layer 3 switches, routers, firewalls and servers.

A Layer 3 switch is a high-performance device for network routing. Layer 3 switches actually differ very little from routers. A Layer 3 switch can support the same routing protocols as network routers do. Both inspect incoming packets and make dynamic routing decisions based on the source and destination addresses inside. Both types of boxes share a similar appearance.

A router is a networking device that forwards data packets between computer networks. A router is connected to two or more data lines from different networks. When a data packet comes in one of the lines, the router reads the address information in the packet to determine its ultimate destination. Then, using information in its routing table or routing policy, it directs the packet to the next network on its journey.

A firewall is a network security system that controls the incoming and outgoing network traffic based on an applied rule set. A firewall establishes a barrier between a trusted, secure internal network and another network (e.g., the Internet) that is assumed not to be secure and trusted. Firewalls exist both as a software solution and as a hardware appliance. Many hardware-based firewalls also offer other functionality to the internal network they protect, such as acting as a DHCP server for that network.

A wireless Access Point (AP) is a device that allows wireless devices to connect to a wired network using Wi-Fi, or related standards. The AP usually connects to a router (via a wired network) as a standalone device, but it can also be an integral component of the router itself. An AP is differentiated from a hotspot, which is the physical space where the wireless service is provided.

A server is a running instance of an application (software) capable of accepting requests from the client and giving responses accordingly. Servers can run on any computer including dedicated computers, which individually are also often referred to as “the server”. In many cases, a computer can provide several services and have several servers running. The advantage of running servers on a dedicated computer is security. For this reason most of the servers are daemon processes and designed in that they can be run on specific computer(s).

Servers operate within a client-server architecture. Servers are computer programs running to serve the requests of other programs, the clients. Thus, the server performs some tasks on behalf of clients. Servers often provide essential services across a network, either to private users inside a large organization or to public users via the Internet. Typical computing servers are database server, file server, mail server, print server, web server, gaming server, and application server.